MCDCC Offices will be closed until further notice due to Coronavirus. All meetings and events will be rescheduled. If you have any questions please use our contact form

If you aren’t sure who to vote for or you just want more information on the Democratic Candidates use the above link. You can also find information about PCPS and drop box locations. 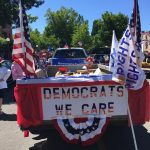 Our primary goal is to elect democrats. This means to all levels of government from the smallest city councils, school boards to the national level Representative, Senators as well as a Democratic President. We are committed to do all that is possible to help elect Democrats to positions not only within our county but on the national level too.

In order to elect Democrats to office we must first identify and recruit them. Without identifying potential candidate we would not be able to run democrats in all the races. If you are interested or know of someone interested in running for public office please reach out to use here.

In order for campaigns to succeed that will always need more grassroots participation. We try to provide support through a multitude of ways such as: volunteers, door knocking, access to space or general support. For lower level offices or people new to running for office we offer help directly with out Candidate Support committee who’s goal is to support candidates.

When possible we do our best to assist candidates with funding. This is critical in campaigns for on the local level where a small amount of money can go a long way. Starting a campaign can be expensive and we are here to help when we can. This is another reason why donations are so important.

Above all else we strive to promote democratic values whenever possible. This is done through participating in events throughout the community such as marches, rallies, volunteering  and providing support when possible. 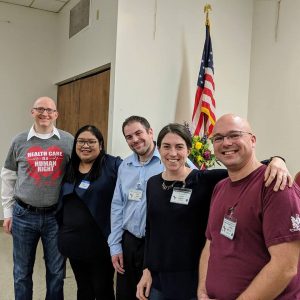 The Marion Democrats are led by the executive committee. This committee consists of Chair, First Vice Chair, Second Vice Chair, Treasurer, Secretary and the chairs of each standing committee.

Evan grew up in West Linn, Oregon and moved down to the Mid-Valley to attend Western Oregon University. In 2010 he graduated with a Bachelor of Science degree in Political Science. He then continued his studies at Oregon State University, where he graduated with a Master of Public Policy in 2012. Since 2014, he has worked for Oregon State Representative Paul Evans as his Chief of Staff. Evan has been a life long Democrat, is an active PCP in Marion County 373, and is the former Chair of the Polk County Democrats. He lives in South Salem with his girlfriend (and fellow PCP) Emily, and a small hoard of cats. 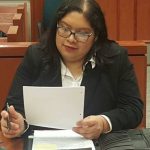 Carina was born and raised in Salem, Oregon. She is currently a student at Western Oregon University and Chemeketa Community College where she is majoring in Political Science. She enjoys participating in undergraduate Mock Trial and plans to enroll in law school upon graduation. In her free time Carina enjoys spending time at the coast with a nice book and warm bowl of chowder, or enjoying the wonderful parks in the Salem area like Minto Brown and Riverfront. Carina is dedicated to helping great democratic candidates run and win. She is also passionate about good music, good food and great books. 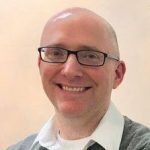 I grew up in Southern Oregon – Josephine County. Graduated from Linfield College in McMinnville. Graduated from Yale University School of Medicine. Completed Emergency Medicine Residency at University of North Carolina Hospitals. I have lived in South Salem Ward 3 and worked at the Salem Hospital Emergency Department since 2008. I served on the Salem Downtown Homeless Solutions Task Force in 2018. Involved with Healthcare for All Oregon, Progressive Salem, the Salem March for Science and many other location organizations.
Lowell WetzelTreasurer 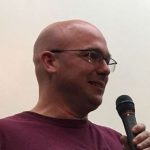 Long term volunteer with the Marion County Democratic Party. I’ve worked on campaigns for local candidates and met many friends along the way.

I am a proud Precinct Committee Person who seeks to make the Democratic party into the party of inclusion that helps bring Healthcare, Living Wages, Universal Funded Public College, and a Green New Deal to reality for everyone.

REACH OUT TO US

Not sure how you can get involved or have general questions? Contact at as this link to find out how.

If you have concerns about anything please also feel free to reach out to us. We are here to support our community and be as inclusive as possible. We strive to make sure that Marion County Democrats is inclusive and support of all walks of life. If we can help accommodate you needs please let us know here.

Want to get involved?

Are you interested in Volunteering? Did you know volunteering doesn’t only mean knocking on doors or calling? There are a multitude of ways to get involved to help elect democrats here in Marion County. Have a specific skill such as speaking, technical or knowledge of topics? We can use your help. Read more here about what you can do

Are you interested in participating within the party? Then becoming a PCP is the first step in being more involved. Please read our page about PCP’s here. You will find out what it means to be a PCP and how it can help elect democrats.

Don’t have time to get more involved with the party or volunteer? You can help us by donating to elect democrats and keep our lights on. Any amount is helpful and goes a long way in reaching our goals. See here to donate either a one time or reoccurring amount.

Do you have time to volunteer? Did you know volunteering doesn’t have to mean door knocking? Do you have specific skills like writing, technical or just about any other skill? We can use your skills to get democrats elected or help our country party.